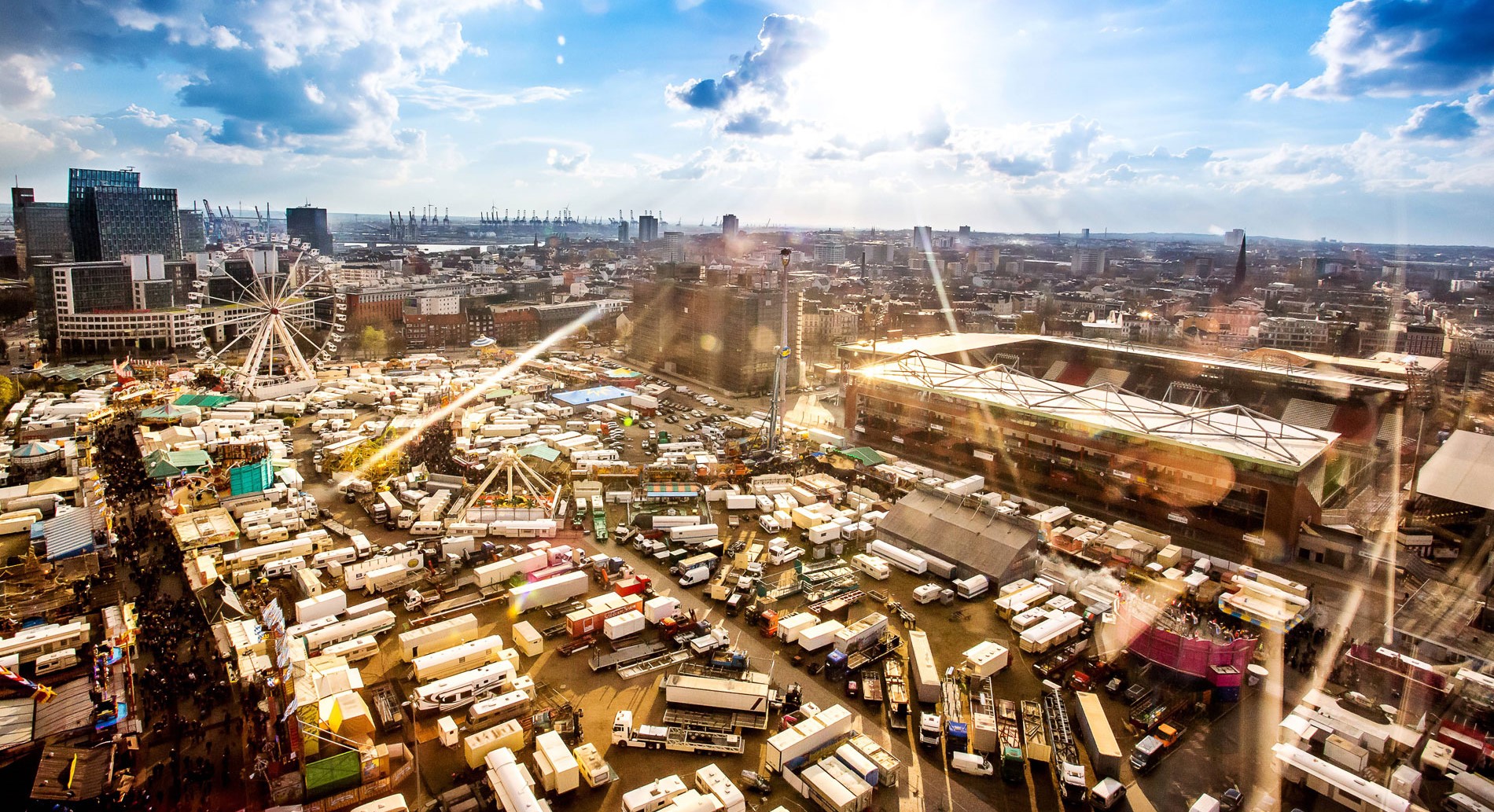 Spring DOM 2022 brought plenty of thrills and fun, as well as an easy-to-follow hygiene plan for keeping safe.

Summer DOM 2021 - The latest news and information on Hamburg DOM

Northern Germany’s largest fair was back for another spring edition! Thanks to an easy-to-follow hygiene plan, the fun continued with plenty or rides, treats and fun.

Spring DOM 2022 began on 25 March without access restrictions. This meant that proof of vaccination or test was no longer required to visit the Hamburger DOM. As a result, there was no check-in at the entrances.

Additionally, the obligation to wear a mask along the DOM-row no longer applied. The FFP2 mask requirement still applied in shops and gastronomy stalls with indoor areas.

There were four new attractions at Spring DOM 2022. For the first time in six years, there was a Freefall Tower, and it was quite something to behold: The Freefall Extreme carries gondolas 85 metres in the air before letting them hurtle to the ground at breathtaking speed. The special kick is the tilting seats, which pitch forward just before falling: pure thrill son the way down! The Freefall Extreme is the largest mobile freefall tower in the world. The high-speed Jetlag ride is designed to be either fast and varied or family-friendly, with forces of up to 4.5 G and speeds of around 100 kilometres per hour, depending on the audience.

Chaos Pendel (lit. 'The Chaos Pendulum') made adrenaline levels spike with speeds of 80 kilometres per hour and forces of up to 4G. And the name says it all: three pendulum arms ensure an unpredictable ride. Countless 'chaotic' rides result from the combination of the three arms and the free-swinging gondolas hanging at each end, making for exciting action at a height of 43 metres. The Flip Fly brought riders a looping swing that defies the laws of gravity. The interaction of the three axes creates a wide variety of rocking and rotating movements, up to and including a rollover at a height of 24 metres. The result: an absolute thrill ride between free fall and weightlessness.

There were also many other attractions for the whole family, such as the Höllenblitz, Dr. Archibald, The Beast, the Wild Mouse XXL or Pirates Adventure. Children enjoyed the ascent and descent on Kuddel the Shark, the balloon ride or mini scooters.

The worrying images and news from Ukraine were on the minds of many in spring 2022. Tens of thousands of people and families fled the war for refuge in German cities, including Hamburg. 'We are deeply shocked by the current conflict situation and the associated effects on the Ukrainian refugees', explained Robert Kirchhecker, President of the Hamburg Showmen's Association of 1884 e.V.

As a sign of solidarity, the community of showmen offered their support in a very special way: Guided DOM tours and monetary donations of €20,000. Kirchhecker continued: 'We are in contact with various aid and refugee organisations. We will invite groups to DOM tours on a weekly basis in order to give the children in particular a few enjoyable hours', explained the association's chairman. In addition, the showmen agreed that financial resources were also needed to make it a little easier for people from Ukraine to arrive in Hamburg. 'We have therefore decided to donate part of the sum to Hanseatic Help e.V. to help ensure that the people who had to leave everything behind can at least be well looked after when they arrive in Hamburg', added the association chairman. He continued: 'In addition, we do not think it is appropriate to allow additional action highlights and the fireworks to take place and have decided not to do so this time.'

In the name of peace: One minute silence on opening Friday

As a sign of peace, the community of showmen observed a minute's silence in place of the fireworks on the opening day of Spring DOM 2022. On 25 March at 10:30 p.m. the entire Hamburg DOM was 'shut down'. The music stopped and the lights went dim. 'We are very grateful that the Hamburg DOM can take place again and that we can pursue our passion. But we are also aware that many people are currently worried about their existence. That's why we want to use our opportunities to send a signal for peace', said Robert Kirchhecker, explaining the idea.

The Hamburg DOM came up with another Easter fun treat for the springtime holiday. Visitors were invited to decorate the largest Easter bush in Hamburg on Easter Sunday! There wasn't just painted Easter eggs: great surprises like DOM teddy bears, DOM treats and tokens for various attractions delighted guests. They could also get a big hug from the Easter Bunny and Bummel the DOM Bear (with selfies of course).

All children up to the age of 12 were welcome to participate.